Stingrays on the flats are considered to be mobile chum bags. Find out why.
PrevPrevious PostsBest Way To Go Tarpon Fishing In Key West

Southern stingrays range in size from 6 inches to 6 ft across and often weighing in over 100 lbs. Stingrays spend almost all their time focused on the bottom. They have only two predators, Man and hammer head sharks. Stingrays give live birth and are not maternal at all. For a few really weird exceptions stingrays are not deadly to humans. If a person were to figure out how to get stung by the barb found on the top of the tail that is about .5 to 3 inches long, then, they may wish they were dead due to the excruciating pain that the infectious mucous on the barb is guaranteed to deliver.

Southern Stingrays On The Flats

Many don’t know it but the Southern Stingray has a very important roll on the shallow flats and flats fishermen should pay attention to their every move. Which is the reason for this Fishing Key West blog post.

Here in Key West, southern stingrays are just about everywhere. When the tide is coming in our going out anyone flats fishing in the shallows will see a southern stingray foraging for lunch or dinner. Food source comprises mostly of crabs, shrimp, miscellaneous crustaceans and the dead or dying. They are the hoover vacuum of the flats.  With all the activity of foraging the stingray also keeps things fresh in the grasses, dusting things off and being a part of the natural grooming process on the flats helping to keep them healthy.

As the stingray forages it creates what we call a mud. The “mud” is an area of turned up bottom that has been fluffed by the stingrays wings as they are in the process of looking for a snack. These muds have time lines. A stingray making a mud is “fresh”. A stingray mud that is not longer being made is “older” and so on.

For flats fishermen the mud is Something to really look out for. I equate it to a flag on the flats. As the mudding stingray is impossible to miss. In some examples I have seen them make such a mess it looked like a boat just took off in that location.

Now, here is the good part. The mudding stingray is just like a portable chum bag on the flats to the rest of the predators that are looking for a snack. While they are fluffing and mudding, little shrimps and crabs are getting the hell out of the way of inevitable death by vacuum. Scooting out in the mud they cannot see till they get to the edge. Then it may be too late. As they flee to the clear waters there are predators lying in wait.

I often tell the captains I have trained as flats fishing guides.

“Never pass up a perfectly good mudding stingray. You just never know what might be behind them.”

Stingrays On The Flats Winter Time

From the months of November through April as the water is cooler is my favorite time to target the mudding stingray when I am flats fishing. First off, they are easy to find in the wind. In certain areas on specific flats its almost a guarantee for my angler to have a nice shot at a jack crevalle or even a bonus of a permit or smaller mutton snapper in the winter. Either way it’s a great fight on light tackle. This time of the year I typically have a mid water or top water lure ready to roll with a crab on a light spinner as back up. Using a lure is good as it will not immediately dive into the grass or make a Ker Plunk presentation spooking the ray or worse yet the targeted fish like a jig will. The crab is for the permit that might be tailing behind the ray.

One thing to remember, these predators following the rays while they are on the flats are on Red Alert to anything that even resembles food they will pounce on a well casted lure or crab. I have my anglers cast past making a track behind the stingray on the retrieve for best results. Varying the speed of the retrieve is also helpful to get the predator on track to tackling the lure.

I really like the MirroLure MirroDine xl for this.

For my fly fishermen the Merkin crab is excellent for all three species mentioned above. Targeting should be just off the back of the ray.

Here Are My Favorite Artificials

Stingrays On The Flats Summer and Fall

In the spring time some dynamics will change. Mostly in reference to the targeted species. I seem to get more shots at permit and mutton snappers with the introduction of bonefish joining the mix as well as the jacks. Makes for a pretty wide open shot.

Through the summer and fall my main thought when I see a stingray is to watch really closely for bonefish and be ready to make the shot. The bonefish have very low attention spans and haste will certainly make waste for an excellent opportunity to get one to eat. Bonefish typically flank the rays mud and will dart in and out looking for the snack. I instruct my anglers to cast the shrimp or jig just behind and past the ray so we can work it through the mud. This almost always results in a hookup.

For my fly fishermen bonefishing behind rays I recommend matching the bottom color with a shrimp patern. A little larger fly than normal making it easy to find.

One of the first things a flats fishing guide learns is to look for muds. Stingrays on the flats make it easy and can be very rewarding. I hope this little article unlocked a piece of it for you. If you would like to book me for a fishing charter please feel free to call.

Get updates and learn from the best

Stingrays on the flats are considered to be mobile chum bags. Find out why. 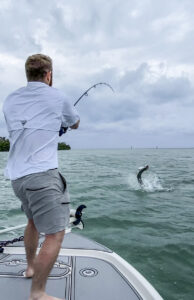 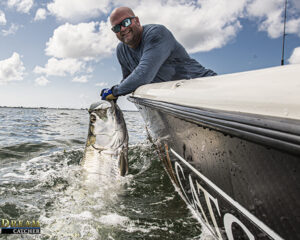